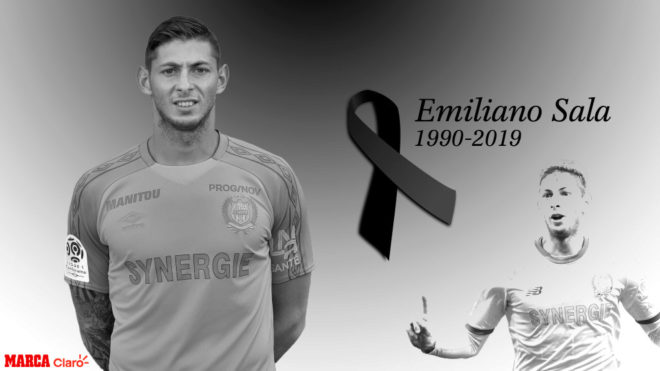 A body recovered from plane wreckage in the English Channel has been identified as footballer Emiliano Sala.

The light aircraft was carrying Sala from Nantes to his new team when it disappeared near the British island of Guernsey, along with 59-year-old pilot David Ibbotson, who has not been found.

Shortly after Dorset Police confirmed identification on Thursday night, Cardiff City issued a statement saying: "We offer our most heartfelt sympathies and condolences to the family of Emiliano".

Dorset Police said they would continue to support the coroner's investigation into the circumstances of the crash.

The Argentine's body has now been formally identified after it was recovered from the underwater wreckage in the English Channel.

Following the discovery, the organisation revealed that it was no longer going to search for the pilot David Ibbotson.

Football personalities all around the world thus took to various social media outlets to send their condolences to the families, friends and clubs involved.

Having finally put pen to paper on his move to Cardiff, Sala was back at Nantes' Joneliere training base to collect his belongings and wave goodbye to his former teammates before departing for Wales again on what proved to be his doomed flight.

Manchester United defender Phil Jones signs new deal until 2023
I want to see my players fight until the end. "When the chance came to buy him, I said, "Take this guy, because for me he could have a good future".

It was a story typical of the January transfer window - a buying club tenaciously chasing mid-season reinforcements but facing stubbornness from a selling club determined not to be left in the lurch by the loss of one of their key players.

Guernsey harbourmaster Captain David Barker called their chances of survival "extremely remote", but a number of high-profile football figures and members of the public answered the family's calls to fund a private search operation.

The remains of the aircraft were tracked down by a team co-ordinated by ocean scientist David Mearns, who has located some of the most elusive wrecks in the world.

The AAIB said efforts to recover the crashed plane as a whole proved unsuccessful, before being abandoned due to poor weather.

Meanwhile, there have been reports that Nantes have demanded the first installment of the payment for Sala from Cardiff, after the Welsh club were said to have withheld initial payment while the investigation was underway.

Sala was Cardiff's record signing but never played for the club.

Rob Gronkowski Will Decide Future 'In A Few Weeks'
Los Angeles would start with the ball in the second half, but five plays later and the Rams would punt to New England. No matter which way you went, so many story lines to follow in this one! That sounds simple. 2/07/2019

Donald Trump hopes talks will allow USA troop cuts in Afghanistan
Karzai and other Afghan leaders were confident that the Moscow siting will pave the way for start of an intra-Afghan dialogue. The Taliban remains averse to any direct or indirect talks with the Kabul government, dismissing it as an American "puppet". 2/07/2019

Unexpected magnetic north pole changes mean new world magnetic model map
Since 1831 when it was first measured in the Canadian Arctic it has moved about 1400 miles (2300 km) towards Siberia. Scientists this week have updated the location of magnetic north a year ahead of schedule. 2/07/2019

Barcelona's Lionel Messi faces fitness race ahead of Copa Clasico
Messi took his tally to 11 in the past nine matches in all competitions, passing 20 league goals for the 11th successive season. Barcelona boss Ernesto Valverde admits he could be without his main man for Wednesday's first leg against arch rivals Madrid . 2/06/2019