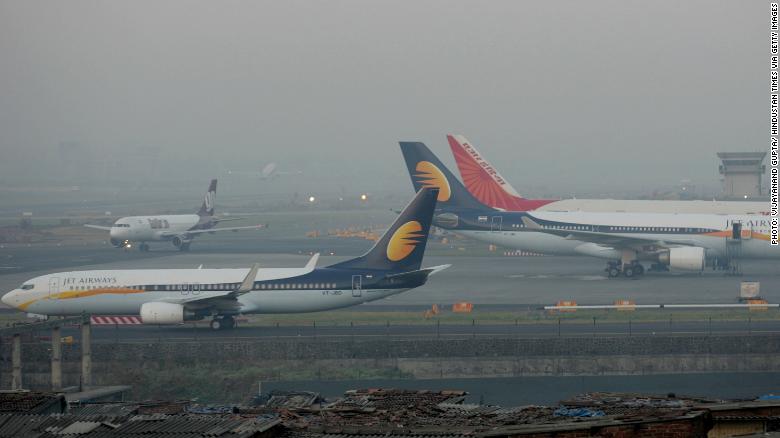 Troubled Indian airline Jet Airways has temporarily suspended all its domestic and global flights after failing to find fresh funding. The airline has put out a statement that it is compelled to cancel all its worldwide and domestic flights. "The last flight will operate today", it said, adding that the decision would take "immediate effect".

Even though Jet was a major competitor to Kingfisher at the time I feel sorry to see such a large private airline on the brink of failure when government used 35K crores (Rs 35,000 crores) of public funds to bail out Air India. This comes after Jet Airways was informed by the State Bank of India (SBI), on behalf of the consortium of Indian Lenders, that they are unable to consider its request for critical interim funding of Rs 400 crore.

The assurance from the government came on a day when Jet Airways wrote to the Prime Minister's Office, the Ministries of Finance and Civil Aviation and the Chief Minister of Maharashtra stating that it needed an urgent induction of funds, without which it will not be able to continue flying.

"The airline will inform all guests about the temporary suspension of flight operations via text message or email to the contact details listed in their bookings". Airline Karma? The former Kingfisher Airlines boss took yet another swipe at the media as well, claiming every offer he makes to pay back funds owed by his now-defunct Kingfisher Airlines to PSU banks resulted in reports that claim he is spooked, terrified etc of being extradited from the United Kingdom back to India. The airline has been forced in recent weeks to cancel hundreds of flights and to halt all flights to overseas destinations.

The Jet Airways statement continued: "Over the last several weeks and months, the company has tried every means possible to seek both interim and long-term funding".

Before its last flight tonight from Amristar to Delhi, Jet's fleet diminished to just five aircraft and 37 flights from 123 planes and some 650 daily flights till December last. The bid process will conclude on 10th May 2019 ... It was unable to pay the salaries of many of its employees (including pilots), as well as leasing fees for most of its aircraft, maintenance costs, and fuel expenses. Meanwhile, Jet Airways, on its website, has said that it is working to handle schedule adjustments including offering re-accommodation choices or extending full refunds as applicable.

Facebook, Instagram, WhatsApp down across US, Europe
Down detector , a website that tracks outages, said users were affected mostly in parts of the United States, Malaysia and Turkey. In late January, the Instagram app crashed, and WhatsApp users worldwide were also unable to send or receive messages. 4/15/2019

Top House Democrat steps up demand for Trump's tax returns
And claimed he would have released them if he was not under audit and that he is now under audit. Trump on Friday confirmed that he has thought about shipping them further inside the U.S. 4/15/2019

Tesla makes it tougher to buy the standard $35 000 Model 3
Any revenue lost from not offering its used cars for purchase is clearly expected to be generated through other profitable means. Moreover, the buyers in the United States will have the opportunity of acquiring their "Long Range" version of Tesla Y . 4/15/2019

Powerful, deadly storms continue to move across South
Downed trees and damage to buildings and a transmission tower were reported, said meteorologist Monique Sellers. The National Weather Service of Fort Worth went on to rate the tornado an EF-3, with 140 miles per hour winds. 4/15/2019