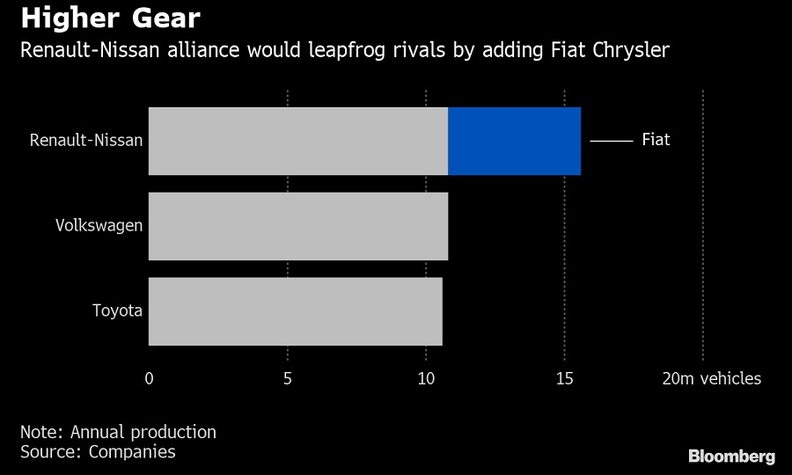 Fiat Chrysler pitched a finely balanced merger of equals to Renault on Monday in a move to cope with the costs of far-reaching technological and regulatory changes by creating the world's third-biggest carmaker. As part of the proposal, each of the companies would own 50% shares of the combined business.

The companies are somewhat complementary: Fiat Chrysler is stronger in the USA and SUV markets, while Renault is stronger in Europe and on electric vehicle developments.

It added that the merger would not result in any plant closures and create annual synergies worth 5 billion euros (R80.7bn) on top of those from the existing Renault-Nissan-Mitsubishi alliance.

Although Renault owns a 43 percent stake in Nissan, the Japanese automaker is the bigger partner by sales and owns 15 percent of Renault, with no voting rights.

A merger between Renault and Fiat Chrysler would make the entity the third largest automaker in the world by sales, behind Volkswagen and Toyota, according to The New York Times.

The merger is still subject to negotiation and to final review and approval by the FCA and Renault Boards.

Shares in both companies jumped more than 10 percent as investors welcomed the prospect of an enlarged business capable of producing more than 8.7 million vehicles a year and aiming for 5 billion euros (4.4 billion pounds) in annual savings.

Renault said in a short statement that its board of directors would consider the "friendly proposal". The alliance is also held together by a web of joint purchasing and car-platform agreements, with both companies sharing their production lines in a number of countries.

Pressure for consolidation among carmakers has grown with the challenges posed by electrification, tightening emissions regulations and expensive new technologies being developed for connected and autonomous vehicles. Should Renault's deal with Fiat go through, Nissan will now find itself chained to the larger entity through deeply integrated operations and cross-shareholdings with the French manufacturer. She said the companies have been discussing a merger for weeks but the French government was only informed last week.

The proposal indicated that Renault's existing alliance with Japan's Nissan and Mitsubishi could continue and that the companies would benefit financially from the deal through extra savings.

A deal could also have profound repercussions for Renault's 20-year-old alliance with Nissan, already weakened by the crisis surrounding the arrest and ouster of former chairman Carlos Ghosn late last year.

Since then, rumors about an FCA merger with Renault compatriot PSA Group, as well as Volkswagen Group, Hyundai, and Chinese automaker Great Wall have also come and gone.

"FCA fits as well with Renault as it does with PSA", Jefferies analyst Philippe Houchois said in a note.

"Renault now has its hands full with its alliance partner Nissan; it's unthinkable that this partnership will be abandoned", Frank Schwope, an auto industry expert at German commercial bank NordLB, said in a research note. "We need giants to be built in Europe". The deal proposed by Fiat Chrysler would give it access to the Canadian and USA markets.

As an unintended outcome, the consideration of a merger with FCA has renewed concerns over the sustainability of the Renault-Nissan Alliance.

Emery reveals Arsenal wanted him to restore 'competitive gene' lost by Wenger
Arsenal had been one of the options considered by Hazard in the summer of 2012 as he sought to move to the Premier League after excelling with Lille . 5/28/2019

"Never say never" - Tammy Abraham answers questions regarding potential Aston Villa return
Tomori and Mason Mount will be playing for Derby County against Blues teammate Tammy Abraham and Aston Villa in the £180m match. They say emotions are intensified when you are a manager and it is true. 5/28/2019

Newcastle legend predicts the Champions League final
I can only think it's the FA thinking, "Oh we'll do this to help England in the Nations League ". Mane, speaking to Telefoot , insists now is not the time for false modesty. 5/28/2019

Indy 500: Simon Pagenaud wins on Penske's golden anniversary
"Team Penske has always been winners, that's why I came here, that's why Simon is here, so you're expected to win", Moyer said. You're never going to have it completely go your way as much as you'd like to, but no, I don't think there's any fix necessary. 5/27/2019

Top Kashmir Militant Linked to al-Qaida Killed
According to police, Ansar had less than a dozen members in the region, most of whom have been killed in the gunfights. Wani's death sparked a summer of protests in Kashmir that paralysed daily life in the region. 5/27/2019

Wisconsin man sentenced to life for slayings, kidnapping of Jayme Closs
Twenty-one-year-old Jake Patterson pleaded guilty in March to two counts of intentional homicide and one count of kidnapping. Wisconsin teenager Jayme Closs says she wants to see the man who kidnapped her and killed her parents "locked up forever". 5/27/2019

Odisha Fire Service To Start Inspection Of Coaching Centres
Many run from private bungalows and several have glass walls which make them even more susceptible in case of fire. Garg also said that inspection reports will be sent to municipalities to take action against erring owners. 5/27/2019

Theresa May says Labour to blame for Brexit talks collapse
Mr Hancock said the current circumstances would make it hard to predict the result of any general election before Brexit. That makes this the most high-profile European election in Britain in years - but it shouldn't be happening. 5/27/2019

Brexit: Why the United Kingdom could come to miss Theresa May - leader comment
Here Ipswich Borough Council leader David Ellesmere says she made several key errors which made her departure "inevitable". Health Secretary Matt Hancock also threw his hat in the ring. 5/27/2019

Five things we have learned from UK's Europe elections
The party has suffered from an inability to explain its position on Brexit, Labour MP Emily Thornberry said on BBC . United Kingdom lawmakers have rejected May's withdrawal agreement, negotiated with Brussels, three times. 5/27/2019

Giannis Antetokounmpo And James Harden Headline The 2019 All-NBA Teams
Green, who joined Thompson as a member of the All-Defensive Second Team, argued his longtime teammate deserved better. Five points are given for a first-team vote, three points for a second-team vote and one point for a third-team nod. 5/26/2019

Nepali Scales Everest Record 24 Times-With One More to Go
Pasang Tenje Sherpa said Mr Cash's brother had sent him a message thanking the Sherpa guides, Norbo and Tenzin, for their help. The news comes just over a week after another Irish climber - Seamus Lawless from Bray, Co Wicklow - went missing on Everest. 5/26/2019

Yoga teacher found alive after 17 days lost in Hawaii forest
According to the Findamanda Facebook page , and HawaiiNewsNow , Hawaii's CBS affiliate, Amanda Eller was found alive on Friday. She lost about 15 pounds, according to Cantellops. "She figured it out, she was smart, she was strong, she was prepared". 5/26/2019

Daughter of Bucks Owner Wears Pusha T Shirt Courtside to Troll Drake
The rivalry eventually spilled over in 2011, with Drake ending up in Pusha T's line of lyrical fire. That led to Pusha T outing Drake for having a child whose birth he never shared with the public. 5/26/2019

Judge Unsealed Jussie Smollett’s Case Because He Talked To The Media
However, the actor's lawyers argued making it public would only make it more hard for the 36-year-old to move on with his life. Soon after, he was arrested and faced 16 felony counts of disorderly conduct for making a false police report. 5/26/2019