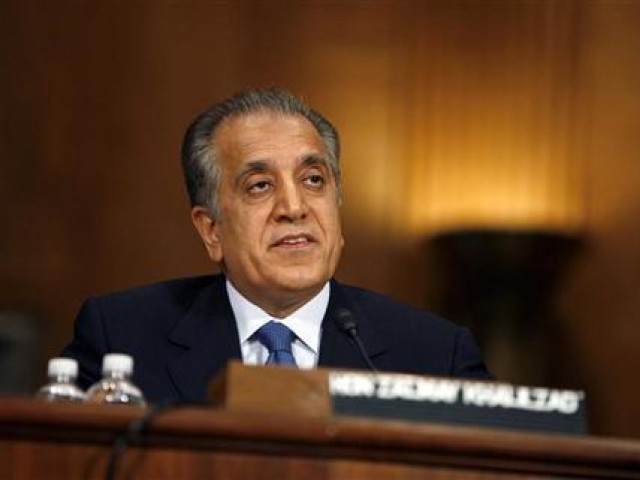 Foreign secretary Vijay Gokhale had met the United States envoy in March in Washington and appraised him about India's view on the Afghan peace process.

The Taliban effectively control almost half of Afghanistan and have continued to carry out daily attacks despite their talks with Khalilzad. "Pakistan is now playing its part in getting the Taliban and the (Afghan) government together and hoping that there will be a political settlement", Khan stressed. No agreement will be done if we don't see a permanent cease-fire and a commitment to end the war.

"It is not right to seek an edge in dialogue through coercion", Pakistan's Prime Minister Imran Khan said.

Khalilzad has signalled progress in talks, which centre on the Taliban guaranteeing Afghanistan can never again be used as a springboard for attacks on foreign soil, in return for an eventual withdrawal of foreign forces. "His appeal for reduction of violence and policy against promoting internal conflict in other nations has potential to positively transform the region and give #Pakistan a leading role", Khalilzad tweeted on Friday.

Khan had last week pledged his country's "unconditional support" for Afghan peace process and urged the Taliban to call off their spring offensive.

Avengers: Endgame beats box office records with $1.2bn debut
It was the second biggest opening in Indian box office history, following Baahubali: The Conclusion's Rs 121 crore opening. Fans eager to see the new Avengers movie didn't take too kindly to a man who reportedly spoiled the ending for them.

Their meeting came during a marathon multi-country tour by Khalilzad, who is to visit Qatar - the usual venue for talks with the Taliban.

India previous year had participated at an "unofficial level" at Moscow format talks by sending its former ambassador to Afghanistan Amar Sinha and former Indian high commissioner to Pakistan TCA Raghavan. During the meeting, the statement said, without any external interference, prominent Afghan politicians and Taliban representatives initiated a dialogue about the future shape of the post-conflict Afghanistan. "We want a peace which will provide the ground for withdrawal".

Ahead of the council, Michael Kugelman, deputy director of the Asia Program at the Washington-based Wilson Center, said that "if Abdullah and his supporters don't attend, there's going to be a glaring absence of key stakeholders that will diminish the event's credibility in a big way".

Afghan-born Khalilzad, speaking in Dari to the Tolo News channel said that during his negotiations, the Taliban admitted that their government "made a lot mistakes" when it was in power from 1996-2001, and "they have learned a lot".

Two weeks ago an announcement from the Taliban instructed its fighters to launch "Jihadi operations with sincerity and pure intentions".