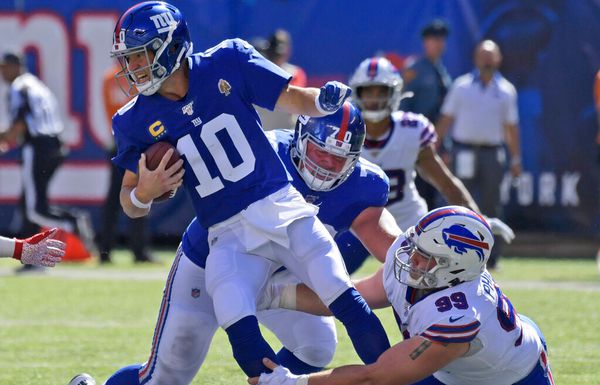 But those storylines have been equaled or surpassed by the news earlier this week that the New York Giants are benching Eli Manning & starting rookie Daniel Jones. Jones went through a brief rough patch in the third quarter before leading the team on an 8-play, 75-yard touchdown drive that he capped off with his second rushing touchdown.

The Giants were losing to Tampa Bay 25-10 heading into halftime. Coach Pat Shurmur has chose to bench the team's starting quarterback Eli Manning. After the Giants made a decision to bench franchise icon Eli Manning, Jones will be making his first National Football League start when the Giants face the Tampa Bay Buccaneers on Sunday (1:05 p.m. PT/4:05 p.m. ET, FOX, DirecTV) in a Week 3 game.

Jones also lost a fumble that led to one of Winston's TD passes to Evans, who finished with eight catches for 190 yards.

Dolphins claim former 1st-rounder Charlton off waivers
Charlton, a first-round pick by the Cowboys in 2017, was waived by Dallas on Wednesday after asking for a trade or his release. Arizona traded Rosen to Miami after drafting him in first round in 2018 before getting Kyler Murray No. 1 overall this year.

Barkley was injured after his right ankle bent awkwardly while being tackled by Bucs safety Mike Edwards. Low-and-behold, less than 24-hours later, Shurmur announced that he was going with rookie first-round pick Daniel Jones over Manning on Tuesday morning.

Buccaneers: ILB Devin White, the fifth pick in the draft, was inactive due to a knee injury.