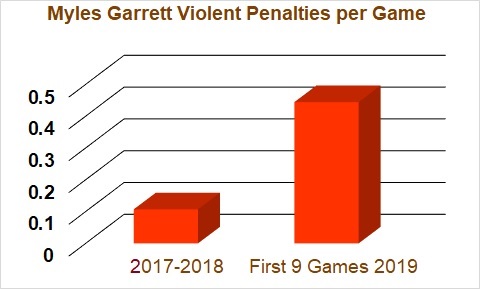 Pouncey was given a three-game suspension, while Myles Garrett, who struck Mason Rudolph in the head with the quarterback's own helmet, was given an indefinite suspension.

According to a report from ESPN, Garrett says Rudolph actually called him a racial slur which is what prompted the outlandish reaction.

In a statement released to ESPN, a Steelers spokesman was also adamant in denying the allegation. "He will not discuss this accusation any further and his focus remains on preparation for Sunday's game against the Cincinnati Bengals".

Saying "there is no acceptable excuse", Rudolph said his behavior in the final moments of last Thursday's 21-7 loss to the Browns fell short of the standard set by the league and the Steelers. You have to think Baker Mayfield and others on the Cleveland side would have had a much different take on the altercation if Rudolph said something racist.

Miami Dolphins running back Mark Walton arrested and waived
He was sentenced in August to six months' probation after pleading no contest to a misdemeanor weapons charge. He was back in the good graces of professional football and had won the Dolphins' starting running back job.

That is a big hit for this Cleveland Browns team and for Garrett. The league is still deciding on appeals from Browns defensive end Myles Garrett and Pittsburgh Steelers center Maurkice Pouncey. "I don't appreciate that".

The NFL initially suspended Pouncey for three games before reducing it to two on appeal, meaning he will not play when the Steelers and Browns meet at Heinz Field on December 1. Thomas took issue that it took almost a week for Rudolph to speak about the fight. I asked Mason right after the game, how did it happen?

"They just gotta go look at it, and I'm not going to comment on it", Garrett said.

"We like Mason. We like what he's done throughout this team development process", Tomlin said of Rudolph, one of Pittsburgh's two third-round picks in the 2018 draft. "But, that kid made a bad mistake but he never crossed the line talking about racial slurs".