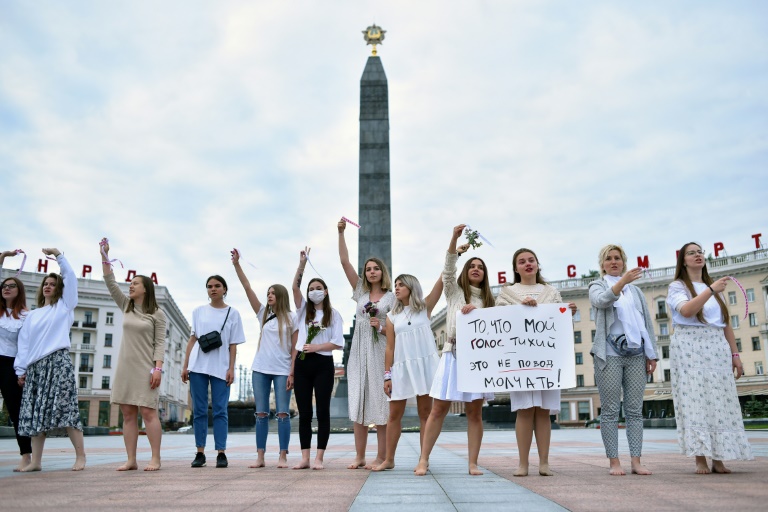 The European Union is gearing up to impose new sanctions on Belarus in response to a violent crackdown in which at least two protesters have been killed and thousands detained.

Later on Friday, Tikhanouskaya released a video message in neighboring Lithuania, where she fled to safety following the ballot.

Yesterday she called for the global community to facilitate talks with the authorities and said she wanted to set up a council to enable a transfer of power, a proposal that was swiftly endorsed by the president of Lithuania.

The Belarusian Interior Ministry said earlier on Friday than more than 2,000 people who were detained during the protests have been released. On Wednesday, he said they were "people with a criminal past who are now unemployed" and told them to get jobs.

Tens of thousands of people took to the streets for a sixth consecutive day, demanding that Lukashenko step down, joined by workers at some of the state-owned industrial plants that are the center of his Soviet-style economic model.

Officials also confirmed a second death in the unrest, after police said one protester died on Monday when an explosive device went off in his hand.

Almost 7,000 people have been detained and hundreds injured since Sunday as police have ferociously dispersed the largely peaceful demonstrations with stun grenades, tear gas, rubber bullets and severe beatings.

The national police chief later apologized to those who were targeted indiscriminately, and the Interior Ministry, which earlier shunned questions from anguished relatives trying to locate their loved ones, opened a hotline Friday.

United Kingdom imposes 14-day quarantine on arrivals from France, drawing backlash
P&O Ferries has limited availability, but one person travelling with a vehicle from Calais to Dover can buy a ticket for GBP200. The move will come as a bitter blow to the hard-pressed French tourism industry which relies heavily on visitors from the UK.

Detainees emerging from a detention centre in Minsk told AFP they had been beaten and deprived of food, water, sleep and medical care.

On Thursday, some demonstrators held placards reading "Change!" and "No violence" and sported white bracelets that have become a symbol of the opposition movement.

A religious procession of various Christian denominations also took place in Minsk while workers at a number of factories across the country reportedly downed tools.

"I remind the Belarusian authorities that the use of force during protests should always be exceptional and a measure of last resort, clearly differentiating between any violent individuals and peaceful protesters, against whom force should not be used", Michelle Bachelet, high commissioner for human rights at the United Nations, said in a statement.

Western governments have criticised the violence, and European Union foreign ministers are set to discuss Belarus at an extraordinary meeting on Friday.

US Secretary of State Mike Pompeo said the election wasn't free or fair and urged the Government to refrain from violence against peaceful protesters.

"In our view sanctions against those responsible for human rights violations will have to be discussed", he said.

In a statement on state television, Senate Speaker Natalya Kochanova said the president had ordered an investigation into the mass detention of protesters, and that more than 1,000 had been freed. USA entrepreneur Elon Musk said on Twitter in response to a call to help Belarusians. "They can cheat some, but they can't cheat the entire people". "You must understand that you are being used, and our children are being used, like cannon fodder", Lukashenko said in televised remarks.

At the same time, today Svetlana Tikhanovski has released a new video message in which he said that where the Commission "counted the votes honestly", her support has sometimes reached 90%.

About 7,000 people have been detained, including the husband of opposition candidate and Lukashenko's main challenger, Sviatlana Tsikhanouskaya, and hundreds were injured in five days of massive protests in Belarus to contest the vote results and demand an end to the 26-year rule of Lukashenko.