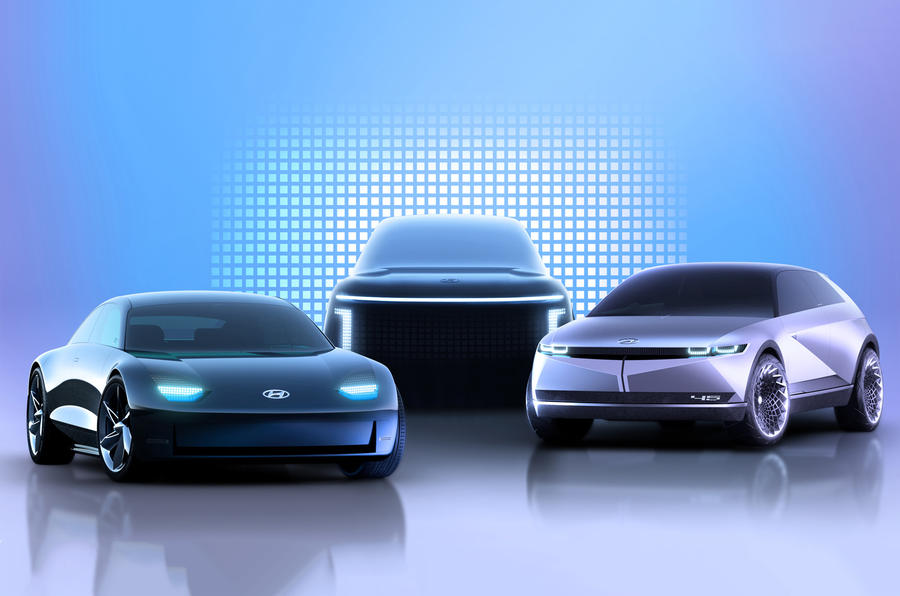 Under the Hyundai Motor Group, the two main brands include Hyundai and Kia, now IONIQ will be a third which will cater to the needs of battery electric vehicles only.

The Ioniq now sells as a fastback electric vehicle as well as with a hybrid (HEV) and plug-in hybrid (PHEV) drivetrain in Australia, although the pure electric form has proven the preferred version for consumers, selling more than double all HEV and PHEV models combined. Now instead of offering a single product with three different propulsion systems, Hyundai is dedicating the IONIQ brand as a battery-electric vehicle maker.

The Ioniq 5 will thus be a crossover (shown above, at right) and based on Hyundai's angular Frankfurt Motor Show concept, the retro-styled, Pony-inspired 45 EV.

As a part of their new Strategy 2025, the Hyundai Motor Group aims to sell 1 million battery electric vehicles by 2025 and claim a global market share of 10% to become a leader in the global EV field.

While a rendering of the first three Ioniq brand models was released, there is a dearth of details about the individual models.

The vehicle is the first in a trio of electric cars coming from a new Hyundai sub-brand for EVs, dubbed Ioniq (yes, the name of Hyundai's current Prius rival); an Ioniq 6 sedan based on this year's Prophecy concept and an Ioniq 7 SUV are also coming. Hyundai and Kia EVs and electrified vehicles will continue to be offered in tandem to IONIQ models.

China wants 'unpredictable' Trump to lose election, says US intelligence
In response Iran fired missiles at a USA military base in Iraq though they didn't cause any fatalities. These nations "have a preference for who wins the election", it added.

Judging by our latest spy shots, the Ioniq 5 will closely mirror the design of the 45 concept. As such, Ioniq models will be sold alongside conventionally powered Hyundais, perhaps in a designated area of a dealer showroom.

The Ioniq 7, however, will be a larger crossover, with no direct link to any existing concept or production model.

The Ioniq range of cars will be based on Hyundai's electric global modular platform (E-GMP). The approach will not only lower the center of gravity but free up space normally dedicated to the engine compartment, translating into roomy passenger compartments.

It remains to be seen if the new Ioniq brand will have sole purview for all future Hyundai BEVs, and the automaker isn't saying whether it might also be used for hydrogen cars to follow the Nexo. Sounds like a Trojan Horse for launching a fresh sub-brand with more zeitgeisty appeal than the resolutely sensible Hyundai badge.

The brand also says all Ioniq-branded models will offer enhanced connectivity features "to integrate in-car and out-of-car experiences for a seamless journey".