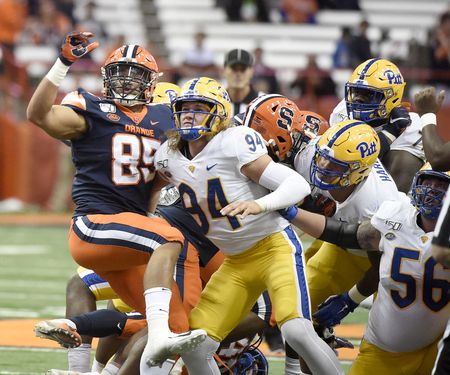 Louisville then faces a three-game road stretch, with games at Pittsburgh, Georgia Tech and Notre Dame.

Syracuse football released its updated 2020 schedule on Thursday morning after the Atlantic Coast Conference switched to 10 conference games and one nonconference game amid coronavirus concerns. Participants in the football title game will be determined based on conference-game winning percentage in the ACC's single-division conference. The league championship game will take place either December 12 or 19 in Charlotte.

Notre Dame-Navy claimed to be the third-longest college football rivalry that was never interrupted, and the longest such rivalry between two teams who weren't conference opponents.

The Broncos found out Thursday their September 26 matchup with Syracuse won't happen in 2020, after the Orange released its 2020 schedule, revealing Liberty University as the team's lone nonconference game. Navy announced Thursday it would replace Notre Dame with BYU this season, along with an agreement to extend the Notre Dame series contract to 2032. The Hokies will travel to Duke, Louisville, North Carolina, Pitt and Wake Forest. Clemson kept the same matchups with Georgia Tech (Oct. 17), Florida State (Nov. 21) and Wake Forest (Sept. 12) on the road and hosting Virginia (Oct. 3) and Syracuse (Oct. 24).

Big 12 Announces 9+1 Schedule
Notable in the schedule release is that the conference has kept the start of the season as the week of September 3. The updated slate of games resulted in a 10-game schedule for each conference team.

Notre Dame's marquee matchup at home with Dabo Swinney's Tigers remains in its originally scheduled November 7 slot, while the Fighting Irish added ACC matchups with Florida State, Boston College, Syracuse and North Carolina - with that game coming on the road the day after Thanksgiving.

But the SEC went to a league-only schedule a day later to eliminate those games, too.

Nine of the Orange's 11 opponents remained the same from the original schedule, which featured four nonconference and eight conference games.

That nonconference opponent for the Irish?