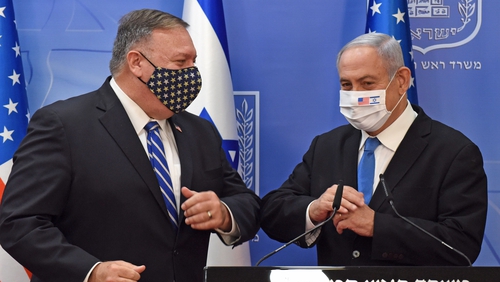 (CNN)President Donald Trump announced that Israel and the Kingdom of Bahrain have agreed to the "establishment of full diplomatic relations", in a joint statement tweeted out by the President on Friday.

Mr Trump is set to host senior officials from Israel, Bahrain and the UAE at the White House on Tuesday.

"Opening direct dialogue and ties between these two dynamic societies and advanced economies will continue the positive transformation of the Middle East and increase stability, security, and prosperity in the region", they said.

Bahrain has accepted Mr. Trump's invitation to join Israel and the UAE for a signing ceremony at the White House on September 15, when Israel and Bahrain will sign an "historic declaration of peace".

The peace deal is the second of its kind involving Israel in the last month in a broader effort by the Trump administration to facilitate "stability, security, and prosperity" in the Middle East. Palestine Liberation Organization executive committee member Hanan Ashrawi tweeted: "If you really wish to "advance the cause of peace, dignity, & economic opportunity for the Palestinian people" how about ending Israel's ruthless occupation & its theft of our land & resources?"

Under the UAE-Israel accord, Israel agreed to suspend the planned annexation of areas of the occupied West Bank.

The UAE's earlier announcement of a normalization of relations with Israel broke with years of Arab League policy on the Middle East conflict but has seen pushback from the Palestinians and Iran, who both termed the deal a betrayal.

Bahrain is acutely aware of threats posed by Iran, an anxiety that comes from Bahrain's majority Shiite population, despite being ruled since 1783 by the Sunni Al Khalifa family. The first regular flight carried Israeli and American delegations from Tel Aviv to Abu Dhabi over Saudi Arabia, which has so far refrained from establishing formal relations with Israel.

Just off the coast of Saudi Arabia, the island of Bahrain is among the world's smallest countries, only about 760 square kilometers (290 square miles).

Zaha Hassan, a visiting fellow at the Carnegie Endowment for International Peace, said Bahrain's move was "especially disturbing" to Palestinians.

Trump's top adviser and son-in-law Jared Kushner described the announcement as sign that a "new Middle East" is emerging. Kushner noted that Bahrain is home to the US Fifth Fleet and the US will continue to develop its military ties with the kingdom.

Friday's deal makes Bahrain the fourth Arab country to reach such an agreement with Israel since exchanging embassies with Egypt and Jordan decades ago.