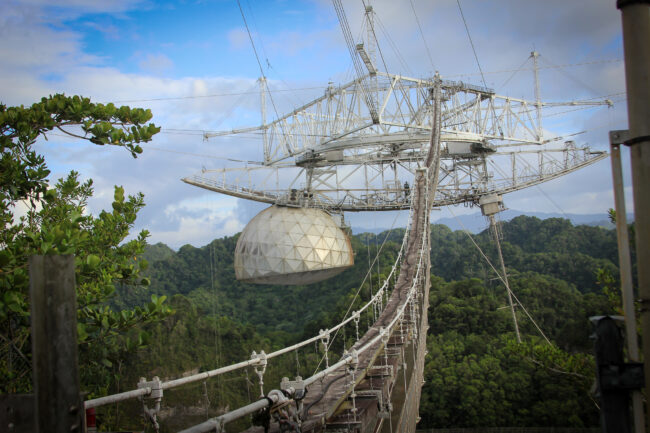 Operations at the observatory were halted in August when one of its supportive cables slipped loose from its socket, falling and creating a 30-metre hole in its 305-metre-wide reflector dish. The Observatory is therefore working on plans for dismantling the giant instrument while temporarily closing other site installations and moving equipment that might be destroyed if the telescope falls apart catastrophically.

For 57 years, the telescope has been an iconic tool used to explore the cosmos and been at the fore of astronomy, planetary, solar system and geospace research. As such the decision has been made to demolish the huge radio dish as soon as possible.

The observatory's main reflector dish surface is made of 38,778 perforated aluminum panels, each about 3 by 6 feet (1 by 2 m), supported by a mesh of steel cables.

The engineering company that examined the structure concluded that the remaining cables were possibly weaker than expected and recommended controlled demolition, which the foundation accepted. Some of its most famous discoveries include the first indirect evidence for gravitational waves and the first planets orbiting a star other than the sun, according to National Geographic.

In the 1970s, it was used to beam a message about Earth and humanity into space, along with the National Radio Astronomy Observatory at Green Bank, West Virginia through a NASA program called Microwave Observing Program (MOP).

Romney calls Trump's efforts to overturn election 'undemocratic,' Sasse slams Giuliani presser
In Arizona , a judge was set to decide on a Republican push to block the certification of election results for the state. Two Republican senators both released statements Thursday based on Trump's failures in court.

One of the most powerful telescopes in the world must be dismantled after it sustained irreparable damage and is in danger of collapsing. "While this is a profound change, we will be looking for ways to assist the scientific community and maintain that strong relationship with the people of Puerto Rico", said NSF Director Sethuraman Panchanathan.

Ralph Gaume, director of NSF's Division of Astronomical Sciences, stressed that the decision has nothing to do with the observatory's capabilities, which have allowed scientists to study pulsars to detect gravitational waves as well as search for neutral hydrogen, which can reveal how certain cosmic structures are formed.

Although the radio dish will be decommissioned, its visitor center and offsite Culebra facility, which analyses cloud cover and precipitation data, as well as the Observatory's LIDAR facility will remain operational, say NSF.

"I was hoping against hope that they would come up with some kind of solution to keep it open", he said. If another cable snapped, it could send a 900-ton instrument suspended 450-feet above the dish crashing down into the dish. The Arecibo Observatory Amateur Radio Club, KP4AO, is headquartered at the research facility, and several radio amateurs are employed there.