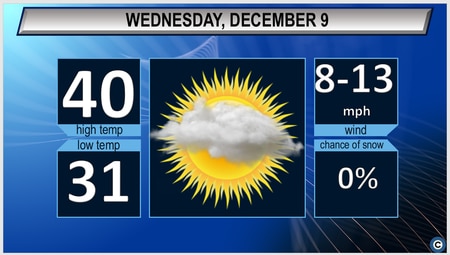 There's a possibility for freezing rain or snow late Saturday night through early Sunday in the Hood River Valley.

The National Weather Service's forecast calls for a gradual warming throughout the rest of the week with highs reaching 50 by the weekend. As far as precipitation, with the low passing by so far north there is little or no chance for measurable precipitation.

Sunday through Tuesday of next week, light off and on snow is expected each day.

Most of next week looks fairly quiet with near-normal temperatures in the low to mid 30s. Sunday morning through afternoon everyone will have a better chance for more valley rain and mountain snow along with stronger breezes. By the later afternoon when rain does develop again, the snow levels will have risen to about 4,000 feet. No snow is expected, yet, but you'll definitely want to pull the parka out of the closet. West wind around 10 miles per hour.

Following a weekend warm-up, the "appetizer" will likely move into the Baltimore area on Monday, as rain mixes with snow showers. Mostly cloudy, with a high near 43.

Partly cloudy, with a low around 35.

Dame Barbara Windsor urged people to ‘make a stand against dementia’
The soap and film star was diagnosed with Alzheimer's disease in 2014 and went public with the news four years later. According to the statement, she passed away on Thursday at a London Care Home. 12/12/2020

Ironheart Disney+ Series Announced
Not only are Sam and Bucky faced with Captain America's legacy with that shield, but also with the crisis that evidently arises. Adding to that, a new trailer of WandaVision starring Elizabeth Olsen and Paul Bettany. 12/12/2020