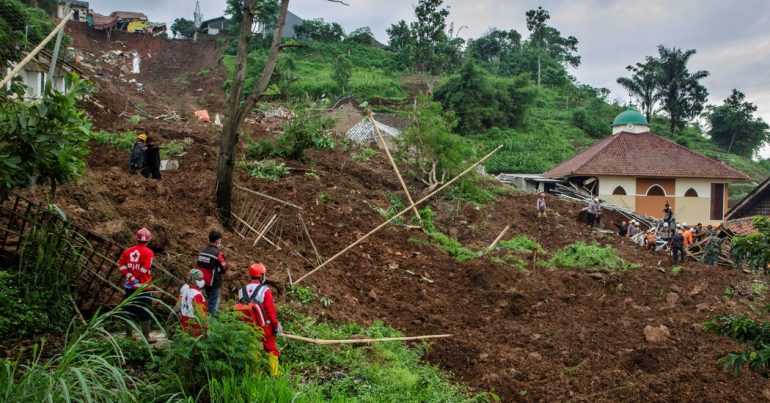 At least 11 people were killed, including a six-year-old boy, and scores more were missing after deadly landslides hit Indonesia's West Java province, authorities said on Sunday.

Heavy rains were blamed for the natural disaster at Cihanjuan village of Sumedang district on Saturday, Head of the Emergency Unit of the Provincial Disaster Management Agency Budi Budiman said.

BURIED ALIVE Rescuers carry the body of a victim after two landslides killed at least 11 people, including a six-year-old boy, with scores more missing in Sumedang, West Java province on January 10, 2021. They were caught in a second landslide that evening. Rescuers worked into the night but faced an urgent need for heavy machinery to help move earth and reach any possible survivors.

The first mudslide buried the family's home, she said, and the second slide, which was larger than the first, buried it even deeper. Several passersby were also on the track of the second slide.

Seasonal rains and high tide in recent days have caused dozens of landslides and widespread flooding across much of Indonesia, a chain of 17,000 islands where millions of people live in mountainous areas or near fertile flood plains close to rivers.