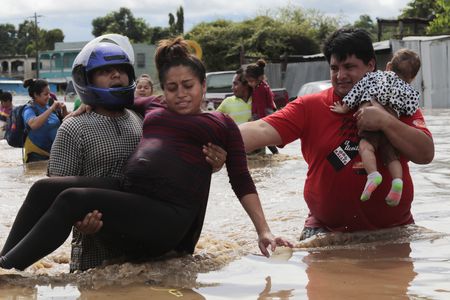 The hurricane centre said Iota had maximum sustained winds of 125 miles per hour early on Monday.

Authorities warned that the risk was high because Iota would probably come ashore over areas where Eta's torrential rains left the soil saturated with water and more prone to new landslides and floods.

In Puerto Cabezas, about 30 miles north from center of the storm, eyewitnesses said strong winds were bending coconut palms and lower lying areas had started to flood by late Monday afternoon, leading more residents to scramble toward overcrowded and undersupplied shelters in a poverty-stricken corner of the country.

"We will help you get over this", the president said in a public message to the inhabitants of the island.

Jose Coleman, an indigenous activist in Puerto Cabezas, said winds had blown the wood siding off a neighborhood house, leaving it partially collapsed. "The winds are whipping".

While Iota's winds could fluctuate as it comes ashore, it won't really matter because widespread damage is inevitable now, said Dan Kottlowski, a meteorologist at commercial forecaster AccuWeather Inc.

They added: "Regardless of development, areas of heavy rain are possible during the next several days from Nicaragua southward across Central America and into Colombia".

Iota's risky forces are expected to exacerbate the situation where dirt and mud has already been loosened up by Eta.

SINAPRED, the National System for the Prevention, Mitigation and Attention of Disasters in Nicaragua, had also suspended sailing and fishing in nearby waters.

Prinsila Glaso, an 80-year-old Miskito woman, told AFP that in her community south of Bilwi "everything is destroyed" in the wake of Eta, and the coming Hurricane Iota would leave little behind.

The NHC forecast that Hurricane Iota would dissipate over Central America by Wednesday. There was overcrowding in shelters lacking in food, mattresses and personal protective equipment.

People hunkered down in Bilwi even before the hurricane arrived, already battered by screeching winds and torrential rains. "Once again people who are least responsible for climate change are suffering the most".

The storm had already left one person dead as it swept the Colombian Caribbean island territory of Providencia, where it caused widespread damage.

The country's President Iván Duque said Providencia could have been hit badly by the storm and stressed there had been "very poor" communication after it struck.

National Oceanic and Atmospheric Administration climate and hurricane scientists studied the effect and found "a lot of that has to do with human-caused climate change". The Colombian Navy will deliver humanitarian aid from San Andrés.

Honduras and Nicaragua could see flooding and mudslides compounded given Hurricane Eta's recent impact on the region.

The storm has weakened and Honduras is expected to be hit later on Tuesday.

Wriedt, who works for a small-scale fishing organisation called Piquinera, said that the roof of her house was blown off in Eta less than two weeks ago.